My Streets Ireland believes in breaking the mould. We believe in empowering people with education. We believe in changing stereotypes with storytelling. Everyone of our guides has experienced, or is experiencing, homelessness. They understand the streets that run through our towns and cities better than anyone else. Here they are. 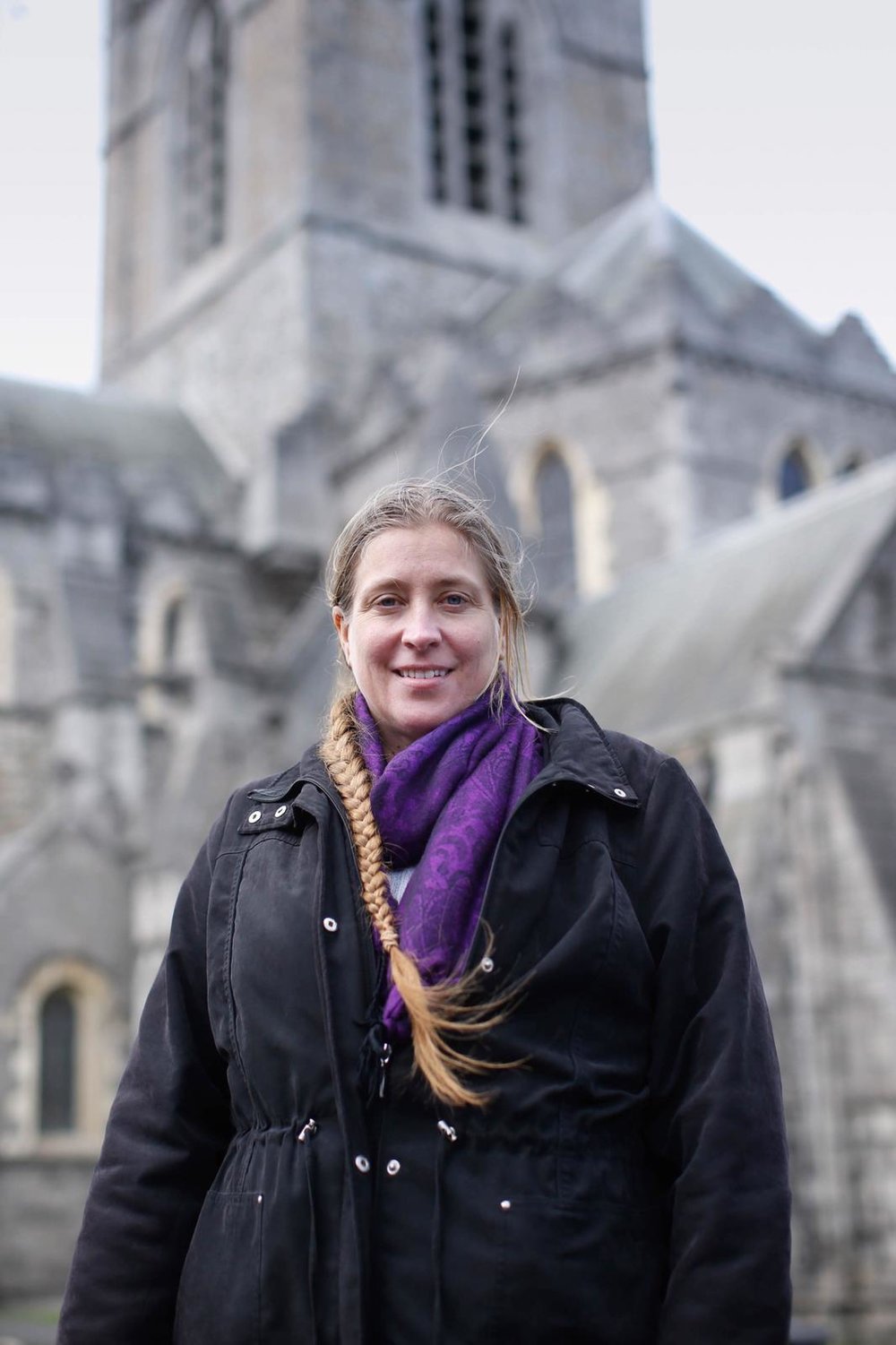 I’m originally from Finland, but I left there 2001. I lived 4 years in Spain, and 11 years in Australia, before I arrived to Ireland. Six months after arriving to Ireland, I was illegally evicted, and I ended up homeless, living in my car with my pets; Two dogs I brought with me from Australia and 2 kittens I rescued two months earlier. After almost two years of court battles, the landlord who illegally evicted me, is still refusing to pay the compensation ordered by the courts, which makes me question the effectiveness of the Irish legal system. I’m currently living in uninsulated and unheated caravan on a farm in south of County Wicklow. It’s not too bad in the summer, but after two cold winters there I hope I can afford something warmer before next winter. I’m very lucky to have that place though, because it’s a safe place for my pets, and my current landlord is very nice. I love acting and film making and studied acting in Australia for 3years, and graduated with Advanced Diploma in Stage and Screen Acting. I have done some short acting courses here in Ireland to brush up my skills, and some extra work on Vikings and Game of Thrones, and other series and feature films. I have interest in Viking Sagas, especially Goddess Freya, which is the reason why I wanted to do a tour about Viking Dublin.

I didn’t have an easy childhood but I always thought my life would be normal as an adult. It didn’t turn out like that; I got involved with the wrong crowd when I was teenager and became homeless when I was 20. I didn’t feel safe in my home and just left one day and didn’t go back. I slept for three years in parks and beside the canal until a year ago when I got a house. I have two dogs that I love more than anyone and they live with me now. I didn’t like school when I was there but love learning now and am back in college learning to read and write better. My Streets has made me much more confident in my ability. I used drugs for years but am off everything now. I’m even on a selection panel for the special Olympics basketball team. There was one night in my tent in the Phoenix Park where I broke down in tears and knew I couldn’t do it anymore. I want to tell people that if I can turn my life around so can they. I would like everyone to be kind to people who down on their luck! 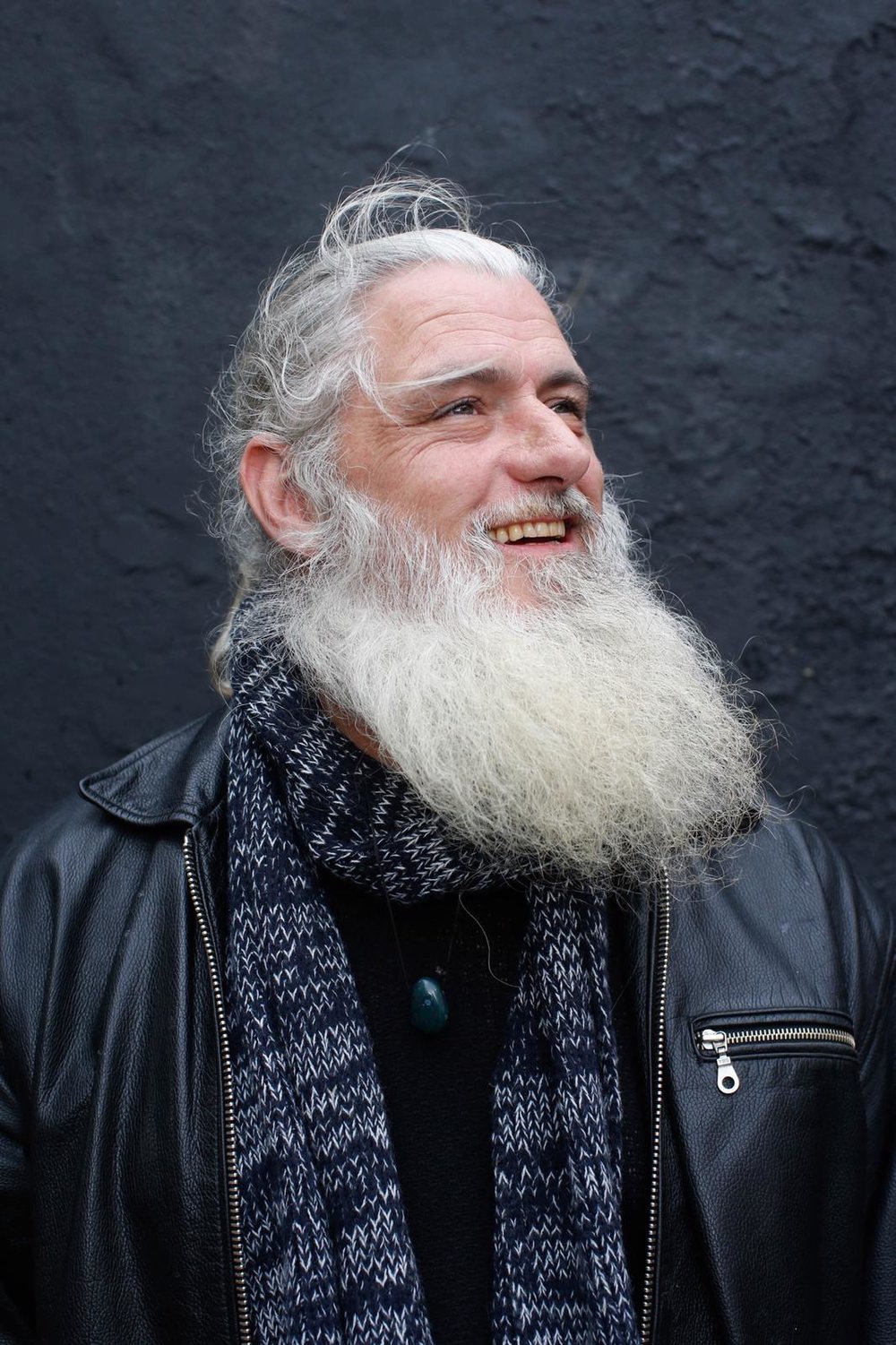 I was rared in Tallaght when Tallaght was a village. As a child I worked on my grandfathers farm and could do a grown man’s work by the age of 12. I’ve put my hand to many things in my life; landscape gardening, music, acting and high end santa claus gigs at christmas time. My father’s death 18 years ago really affected me. I hit the drink on and off over the years that followed and became homeless for the first time three years ago. People tell me I’m a character and maybe they are right. At least I’m interested in people with stories, characters, like Brendan Behan, Luke Kelly, Patrick Kavanagh. People bedivlled by drink, loveable rogues whose passing makes the world a darker place. Maybe I see some similarities between them and me. And just like them, I only scare people who scare easy! 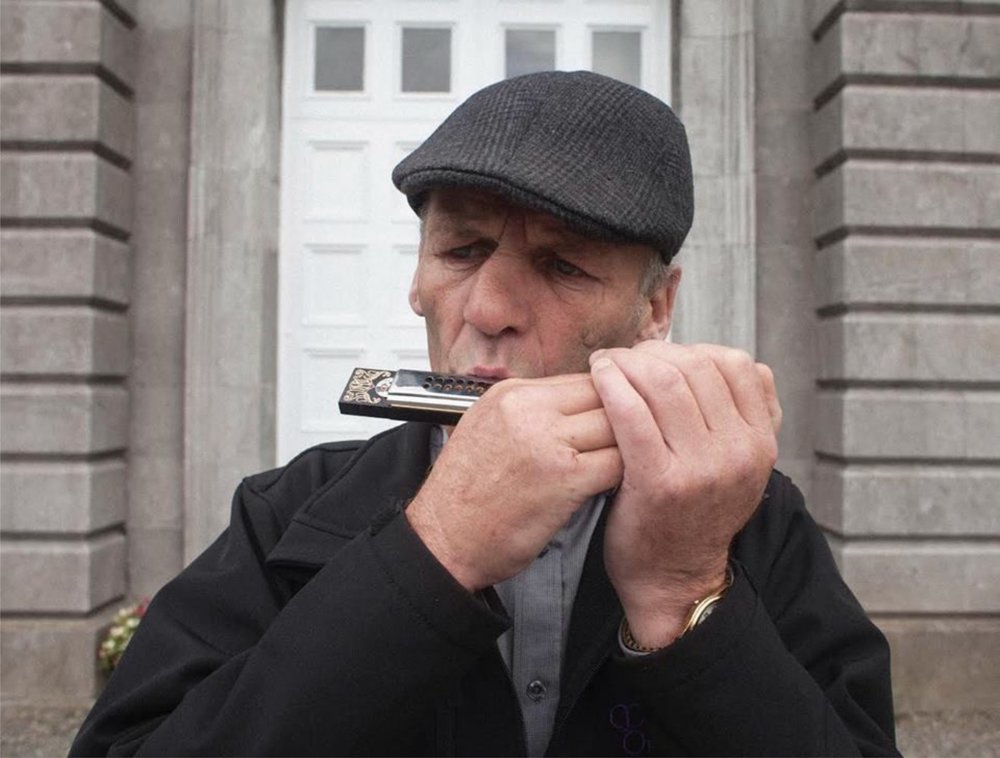 I’ve been a My Streets guide since the show went on the road in 2014. My life has changed a lot in the last five years. I live in my own house and have my own car now and do Food Cloud collections for the community centre in Moneymore. I used to be a very heavy drinker and it almost ruined my life; I lost everything and spent years homeless. I haven’t touched a drop now in five years. I’m a traveler and was never given a chance in school; the teachers used to put me sitting down the back of the class and I learned very little. I’ve learned to read and write recently to help me learn with My Streets.I give tours with Cyril, I play the harmonica and tell the odd joke and he does the history! 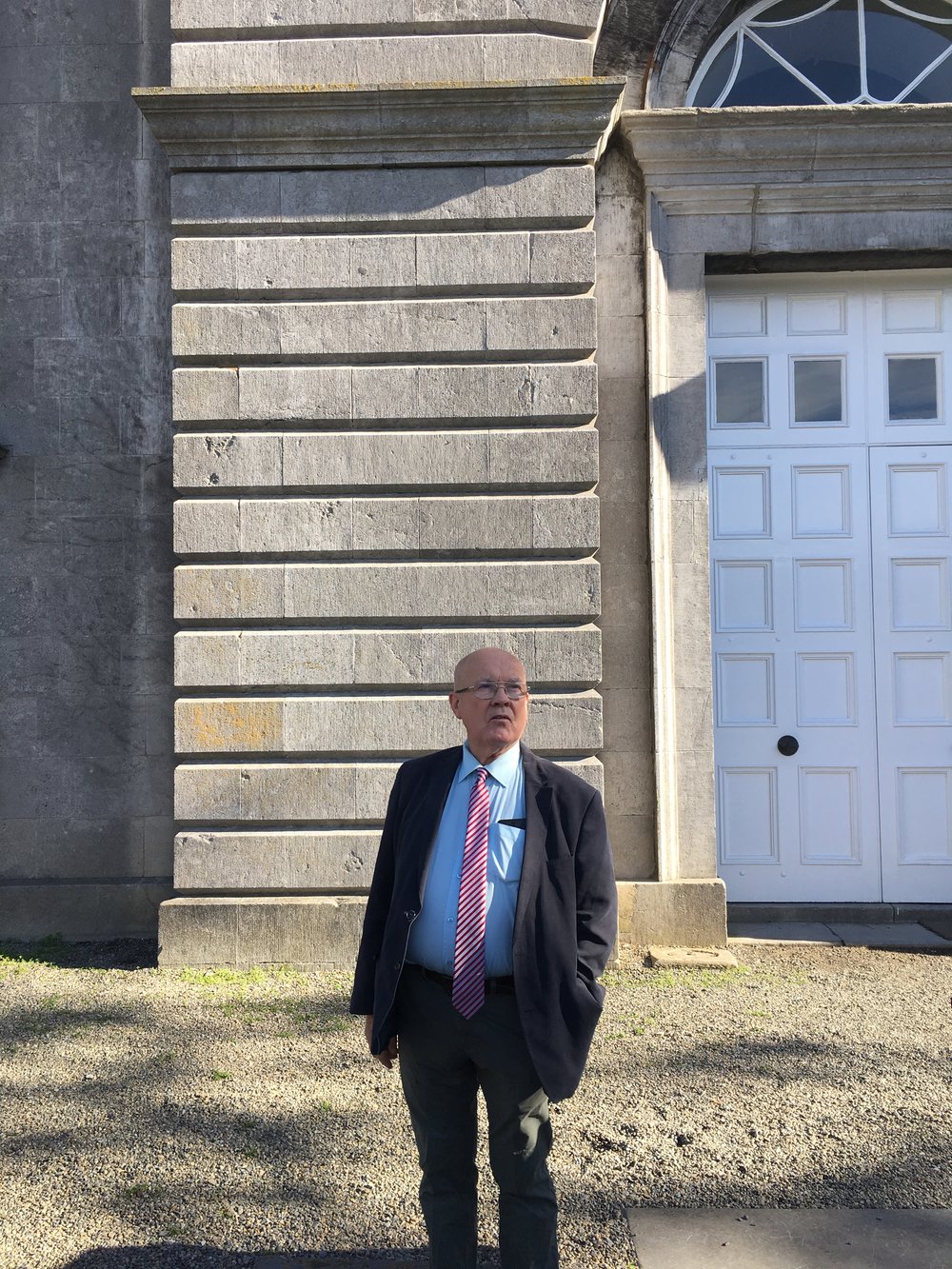 I’m 75 years old and still working; I must be the oldest working man in Drogheda! I became involved in My Streets when it was first set up out of Drogheda Homeless Aid and Drogheda Civic Trust five years ago. I had lived there years before that after I was first referred to Drogheda Homeless Aid and subsequently settled in the town. I’m from the midlands originally. I have a passion for history and politics and love walking people through Drogheda’s fascinating thousand year history. 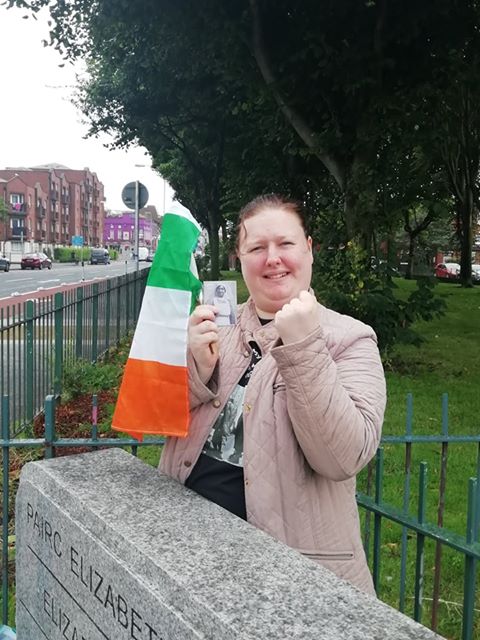 I was very shy growing up and didn’t know how to communicate with people. I stayed to myself. My family were a great influence, especially my grandparents who always took the time to tell me stories and answer my questions.

I didn’t really enjoy my experience in school until I did a tourism course in Roslin Park College, Sandymount when I was 20.It was learner led and I was able to get what I wanted out of it. It gave me independence, self-belief and an ability to have fun.

I love history. I have a wide interest in it and go on as many tours as possible. I watched an RTE programme called ‘Rebellion’ where I learned about the role Irish women played in winning independence for the first time.

I joined My Streets in March 2019 after hearing about it in the hostel where I live. I have lived in Peter McVerry hostels for the past three years which have been very supportive and given me confidence. Another really positive thing for me has been the Arch Club, a social club that gives people with intellectual disabilities dignity and something to do.

My Streets sounded perfect and I began to research the women of the 1916 Rebellion.

In the future I hope to tell as many people as possible about the role of women in history and become a memorable and strong woman myself! 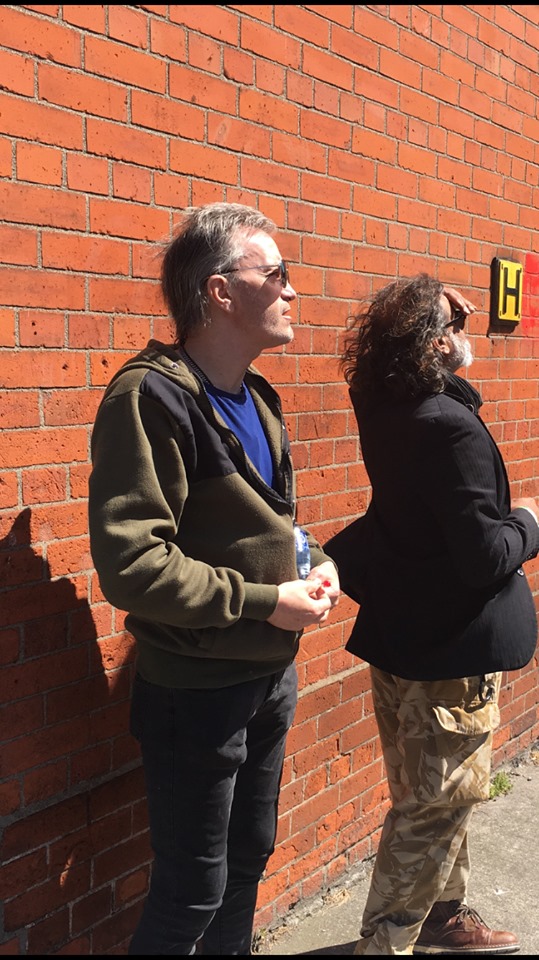 I was born in the heart of the Liberties in Meath Street, the youngest of 8 kids. My father owned a shop there for about 50 years there. I’ve worked most of my life up until eight years ago when I contracted Wyles disease at work. This started a run of bad luck for me; I lost my job and my girlfriend of twelve years and I moved in with my parents, she had a heart attack and died a year later, and my mother and father died within the following eighteen months

The house was sold and I became homeless. I was on the streets for6 months and became dependent on alcohol and heroin to cope. Things changed when I got a hostel; I gave up drugs and alcohol and did a number of educational courses like My Streets.

I recently got my own place and things are looking up. I’m just about finished training to be a home-less Health Peer Advocate and will soon be helping others to give back to those who came to my aide when I needed it. I’m appreciative of all the support I’ve had over the years and look forward to sharing my story. 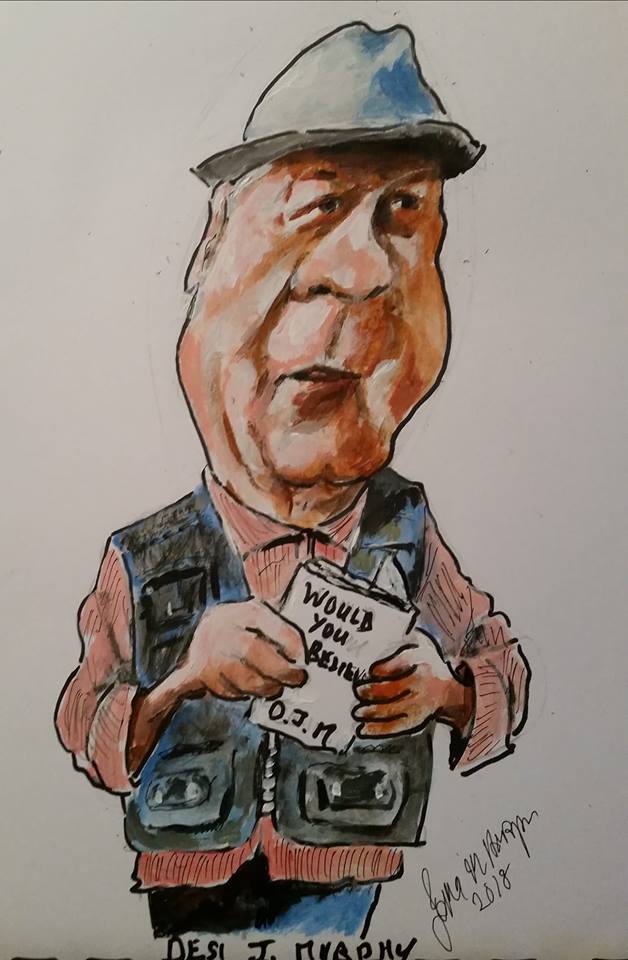 I was born in Marian year 1954 in the Coombe and lived in Francis Street, just around the corner, for the early part of my life. I was beaten in school and fought in the streets and generally felt out of place. I ran away from home at 13 and I suppose you could say that’s when I first became homeless. Life was tough but comedy and laughter kept me going; It allowed me to rise above a difficult environment.

I was a gambler from the age of 14. I stopped gambling at the age of 17 because I was afraid I’d lose money which I could spend on the drug of my choice; alcohol. I drank heavily and stopped doing everything else. I was ‘Des the Drunk’ and people laughed at me.

My life changed when I met Sr. Concilio on the 1st April 1984. April Fools Day; I ‘ve often wondered does the good lord have a sense of humour. She took me in and sought to understand me. Staying off drink is a hard battle and all the things that were pushed down with drink started to come up. I’ve had panic attacks when I’ve been sober too.

Life has improved dramatically with sobriety. I’ve lived in Jamaica, and China and spent time in U.S.A. and Australia. I’ve served in the Irish Army.

I got my current place in 2009 but homelessness doesn’t stop when you get a place; you need to feel at home within yourself. I’ve always wanted to participate in the arts and Sr. Stan Kennedy gave me that opportunity. It was also around this time that I was first diagnosed with autism. I realised I had it all my life and that was why I had always felt out of place. Focus Ireland helped me understand a lot of things about myself. My Streets has built on this and given me a sense of purpose and value. I walk the streets in a different way now; with my head held high.

I recently received a QQI Level Five in Theatre Performance and have also self-published my writing which is available here;

I grew up in Chandigarh province India, and served in the military before coming to Ireland in 2002 to find work with my Master’s Degree.

This was shortly after the 9/11 Twin Towers attack in the U.S.A. and I received a lot of racist abuse at the time. Because I looked different people assumed I was Muslim and somehow complicit in terrorist acts. I was actually born Hindu and am now a humble Sadhu. Being an object of racist abuse affected me a lot.

People called me Mohommad instead of my real name, Amit. A turning point for me came in 2004 when I first heard of Robert Emmet. After that I explained my name was Amit ‘like Robert Emmet’; I feel people understood me differently after that. I also began to work as a motorcycle courier where you were allowed make up your own radio name. This brought a lot of freedom; to be able to define something is to have power.

The economy collapsed around this time and I lost my job and accommodation and ran into personal family problems. My spirituality allowed me to embrace this lack of stability as a form of minimalism rather than homelessness. I never considered myself as a victim.

It’s only recently that moved into an emergency accommodation facility and would consider myself homeless. It was here I first heard about My Streets Ireland and look forward to sharing my unique cultural insights into the wonderful city of Dublin as a My Streets Ireland tour guide.